A year after the Covid-19 outbreak triggered widespread social and economic upheaval, Asia is emerging out of the crisis stronger and with greater influence on the world stage, pulling the globe’s economic centre of gravity steadily to the East.

Asia’s effective handling of the pandemic and its economic resilience owe a lot to a series of path-breaking structural reforms which the region has been advancing in the past 20 years or so, a process which we expect will pick up pace the coming decade.

Economic activity across the region has largely returned to where it was before Covid-19 struck, thanks to its exemplary management of the pandemic. (Asia’s Covid safety and resilience are ranked as the best in the world.)

What’s more, the bloc’s anti-crisis economic policies have been prudent and measured, in contrast to the West, where governments and central banks have been forced onto a war footing.

Take China. Although it was at the epicentre of the pandemic, policymakers there have not had to resort to excessive fiscal or monetary largesse. China has not experienced a build-up in borrowing on the scale that developed economies did. The world’s second largest economy went into the crisis with public debt at below 50 per cent of GDP, which we forecast to rise to 67.7 per cent by 2022. The picture is similar in the rest of emerging Asia, comparing favourably with G5 economies where the average debt-to-GDP ratio should exceed 150 per cent by 2022.

In other words, Asia has managed to support growth without sowing the seeds for future financial risks.

We expect the bloc’s GDP growth to rebound strongly to 8.9 per cent in 2021, ahead of advanced economies which should grow just 4.9 per cent. That performance looks stronger still when set against the region’s shallow contraction of just 0.2 per cent last year, compared with 5.2 per cent for its developed counterparts.

Asia’s effective handling of the pandemic and its economic resilience owe a lot to a series of path-breaking structural reforms which the region has been advancing in the past 20 years or so, a process which we expect will pick up pace the coming decade.

Since the currency crisis in the late 1990s, Asian nations have strengthened the foundations for long-term prosperity by reforming their institutional, regulatory and capital market framework and boosting international competitiveness.

The deal should help boost long-term growth even more by lowering trade barriers and further lifting foreign direct investment. Asia’s FDI remains resilient despite the pandemic. In 2020, China beat the US as the largest recipient of FDI in the world, attracting USD163 billion.

Southeast Asian countries, such as Vietnam, less developed than its Northern counterparts, should benefit the most from the new pact as they build a manufacturing base that will capitalise on demand from importers keen to diversify away from China.

Vietnam is one of the most dynamic Asian nations, offering high political stability, a deeply integrated global market and abundant labour with its young population of 100 million people. Its successful handling of the pandemic has added to the country’s credentials. Thanks to its geostrategic connectivity to China and the rest of Asia, Vietnam should attract a greater share of FDI in the coming years.

At a pan-regional level, Asia’s living standards are improving fast and its population is becoming more urban and affluent. By the end of the next decade, Asia will account for two thirds of the planet’s middle-class3  – a cohort whose consumption and investment habits will transform the business landscape.

Asia’s rise will have far-reaching implications for investors. Not least because the financial markets have yet to take notice. A glance at the world’s equity and bond indices shows Asia is woefully under-represented.

Emerging Asia makes up a mere 10 per cent of the global equity market index and just 3 per cent of the bond counterpart  – even though it accounts for around 24 per cent of both the world economy and global corporate profits (see Fig. 1). 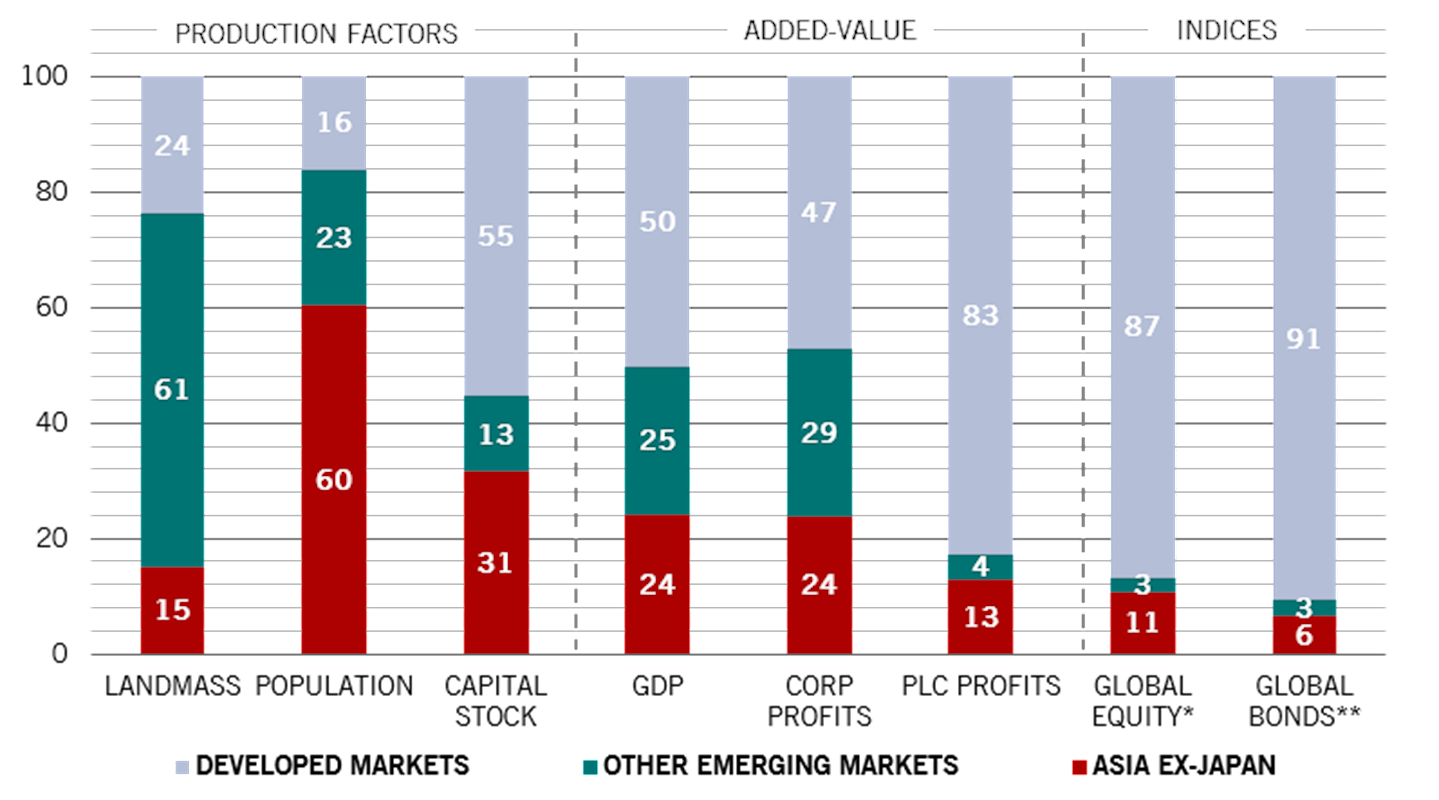 That disparity will not remain for much longer. As the region’s capital markets gain depth and open up to foreign investors, Asia is certain to become a much bigger feature of the investment universe.

Unsurprisingly, China is the disruptor in chief. With its population ageing rapidly and its investment needs rising as a consequence, the world’s second largest economy has every incentive to integrate more fully into the global financial system, drawing in foreign capital as it does so.

To achieve that, it needs to press ahead with reform. Here, the signs are encouraging.

Beijing has already relaxed rules to make it easier for foreign investors to trade Chinese bonds; it has also launched a new Nasdaq-style stock exchange and introduced other initiatives to attract funding into its burgeoning technology and artificial intelligence sectors.

The global health crisis is not slowing the pace of reform. To the contrary.  In October, China detailed steps to grant more autonomy to Shenzhen, letting the southern financial and technology hub pilot reforms in market development and economic integration. Under the trial scheme, Shenzhen will launch stock index-futures and issue offshore yuan-denominated local government bonds, while some companies will be allowed to issue shares.

Responding to these changes, global index providers have started to incorporate more Chinese assets in their bond and equity benchmarks. It is a development that is expected to generate combined inflows of more than USD300 billion in the coming years.

The near-term economic prognosis is also sound. We expect China’s GDP to grow 9.5 per cent in 2021. Another Asian power house India, which suffered a sharp contraction in 2020, should bounce back strongly in 2021 – we expect its economy to grow 13.1 per cent.

Asia’s superior growth profiles should also help boost the region’s asset performance over the next coming years. We expect emerging Asian stocks to gain nearly 12 per cent every year in the next half a decade – nearly double the pace of those in developed markets. Asia’s local currency debt should also perform strongly, notably in China, at a time when investors in developed market bonds face the prospect of capital losses once adjusted for inflation (see Fig. 2). 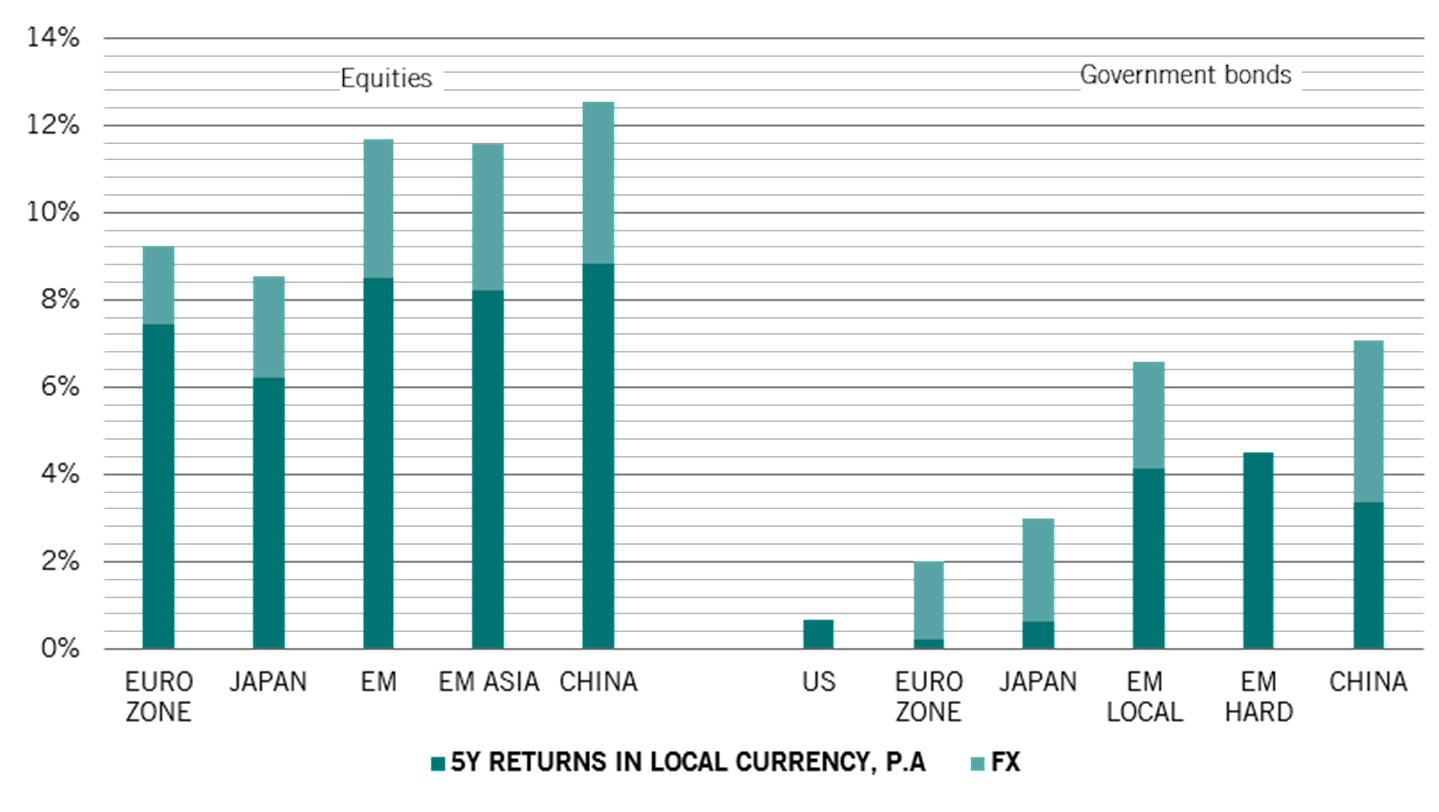 It has been long predicted that if the 19th century belonged to Europe and the 20th century to the US, the 21st century belongs to Asia. The region is poised to grab a greater slice of international investment as it develops into a strategic asset class. Investors will have to change their portfolio allocations to reflect Asia’s growing heft.

Information, opinions and estimates contained in this document reflect a judgment at the original date of publication and are subject to risks and uncertainties that could cause actual results to differ materially from those presented herein. This marketing document is issued by Pictet Asset Management. It is neither directed to, nor intended for distribution or use by any person or entity who is a citizen or resident of, or domiciled or located in, any locality, state, country or jurisdiction where such distribution, publication, availability or use would be contrary to law or regulation. Only the latest version of the fund’s prospectus, the KIID (Key Investor Information Document), regulations, annual and semi-annual reports may be relied upon as the basis for investment decisions. These documents are available on assetmanagement.pictet.

This document is used for informational purposes only and does not constitute, on Pictet Asset Management part, an offer to buy or sell solicitation or investment advice. It has been established on the basis of data, projections, forecasts, anticipations and hypothesis which are subjective. Its analysis and conclusions are the expression of an opinion, based on available data at a specific date. The effective evolution of the economic variables and values of the financial markets could be significantly different from the indications communicated in this document.

Information, opinions and estimates contained in this document reflect a judgment at the original date of publication and are subject to change without notice. Pictet Asset Management has not taken any steps to ensure that the securities referred to in this document are suitable for any particular investor and this document is not to be relied upon in substitution for the exercise of independent judgment. Tax treatment depends on the individual circumstances of each investor and may be subject to change in the future. Before making any investment decision, investors are recommended to ascertain if this investment is suitable for them in light of their financial knowledge and experience, investment goals and financial situation, or to obtain specific advice from an industry professional.

The value and income of any of the securities or financial instruments mentioned in this document may fall as well as rise and, as a consequence, investors may receive back less than originally invested. Risk factors are listed in the fund’s prospectus and are not intended to be reproduced in full in this document. Past performance is not a guarantee or a reliable indicator of future performance. Performance data does not include the commissions and fees charged at the time of subscribing for or redeeming shares. This marketing material is not intended to be a substitute for the fund’s full documentation or for any information which investors should obtain from their financial intermediaries acting in relation to their investment in the fund or funds mentioned in this document.

The European Central Bank (ECB) came under rising pressure to exit the negative interest rate policy it has held since 2014, with the first rate rise expected as early as July.

A reduction of the US Fed’s swollen balance sheet has long been debated and so far postponed. But what would such action entail and how could this impact the economy and financial markets?

As the world faces the challenge of transitioning to a carbon-free future by 2050, companies are facing pressure to operate their businesses more sustainably to meet ambitious net-zero targets.