By Victoria Beckett, Editor and Copywriter at Schroders

Older investors as well as the young are putting their savings into a range of riskier holdings including cryptocurrencies and investments focusing on specific sectors such as healthcare and tech, research by Schroders has found.

While young investors’ interest in bitcoin and other crypto is well documented, Schroders’ data uncovers a surprising level of interest among older savers – including those aged over 75.

One third (33%) of those aged between 55 and 74 – said they bought crypto in the 12 months up to spring 2021. This was a first-time investment for 16% of respondents in that age group, while 17% said they were adding to existing holdings. A smaller but still significant 15% of over-75s had also invested in crypto in the same period.

These findings are part of the Schroders Global Investor Study 2021, the bellwether annual survey which highlights trends based on the answers and opinions of more than 23,000 investors in 33 locations. Data was gathered between March and August 2021.

While Schroders’ findings confirm that investors aged between 18-41 are the most committed to cryptocurrencies (see table, below), the difference between younger and older age groups is narrower than might be expected. For example, 24% of those aged 18-22 invested in crypto for the first time in the past year, compared to a similar 22% of the 42-54 age group.

All generations are taking on more risk

More than a third of people of all age groups said they will or had allocated more towards high-risk investments following the lifting of lockdowns. Unsurprisingly, perhaps, younger investors seem to have the greatest appetite for risk with 44% of 18-37 years old saying that they will allocate more to riskier investments. But 28% of 51-70 years olds, and 22% of people aged 71 or over older, also said they were taking on more risk. 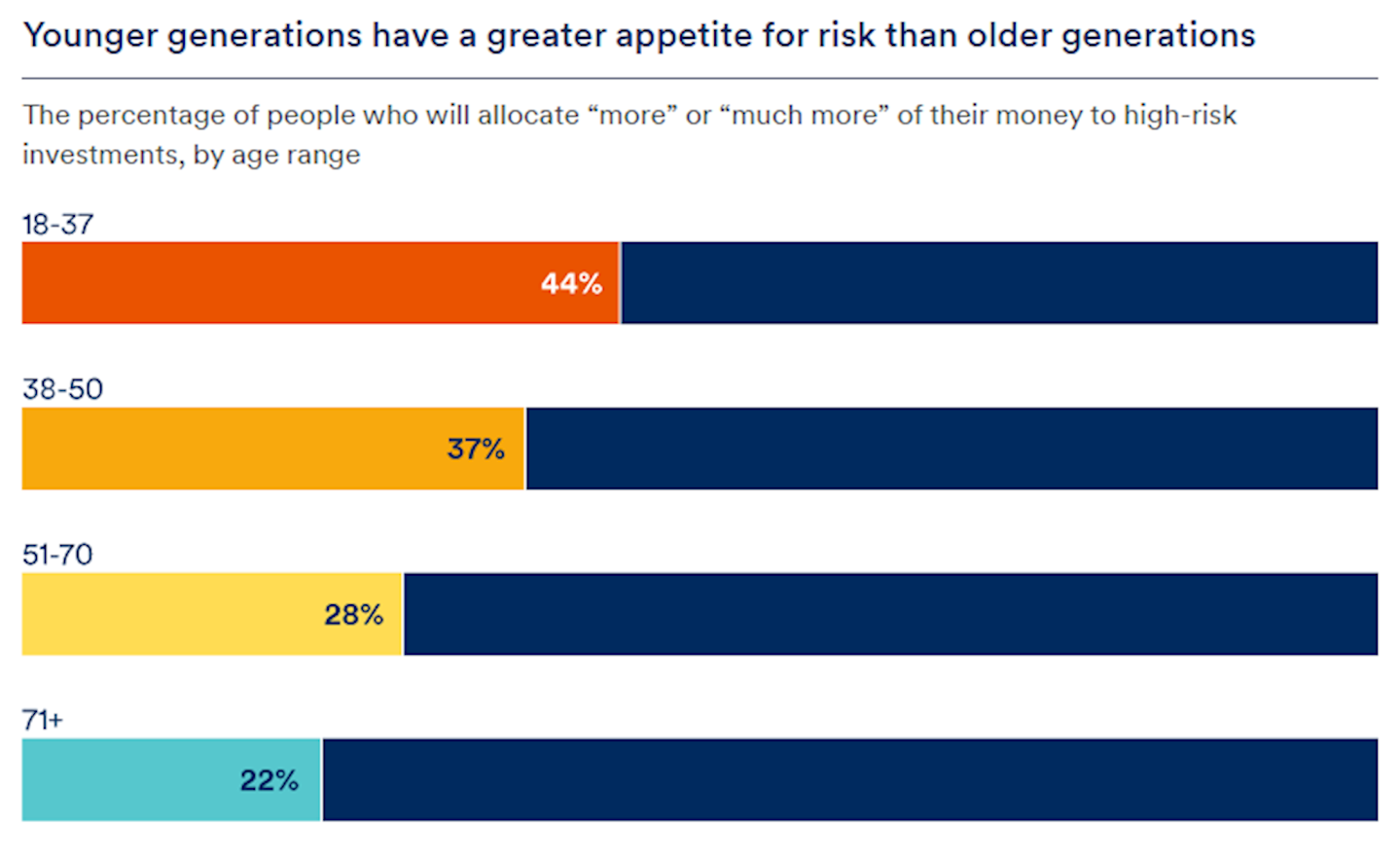 Alongside cryptocurrencies, new technologies are also in demand as savers move toward higher-risk or newer assets (see chart below). Across investors of all ages, electric vehicle-related stocks and funds are ranked most popular (24%), with biotech or pharma second (23%). Internet and tech stocks, along with cryptocurrencies, are jointly in third position.

Again, when viewed by age group, older savers are also keen on these assets. Almost half (45%) of those aged between 55-74 either invested in electric vehicle funds or stocks for the first time, or said they wanted to invest. A further 27% of respondents aged 75 or above gave the same response.

“Our research indicates that many people feel they now have to take on more risk in pursuit of returns following the pandemic,” says Lesley-Ann Morgan, Head of Multi-Asset Strategy at Schroders.

Economic disruption in the wake of the pandemic has played a part in driving this trend, she suggests. “Amid the low interest rate environment, riskier investment choices have unsurprisingly become more compelling.”

In recent years the value of many investments and holdings – including some widely-held cryptocurrencies – has risen strongly. This trend may not last.

“Overall these findings demonstrate that the proportion of investors open to embracing greater risk has increased, but with 63% of people stating that the performance of their investments also has an impact on their mental health, they should ensure that risk is approached judiciously,” she warns.

Marketing material for professional clients only. Investment involves risk. Any reference to sectors/countries/stocks/securities are for illustrative purposes only and not a recommendation to buy or sell any financial instrument/securities or adopt any investment strategy. The material is not intended to provide, and should not be relied on for, accounting, legal or tax advice, or investment recommendations. Reliance should not be placed on any views or information in the material when taking individual investment and/or strategic decisions. Past performance is not a guide to future performance and may not be repeated. The value of investments and the income from them may go down as well as up and investors may not get back the amounts originally invested. Exchange rate changes may cause the value of investments to fall as well as rise. Schroders has expressed its own views and opinions in this document and these may change. Information herein is believed to be reliable but Schroders does not warrant its completeness or accuracy. Insofar as liability under relevant laws cannot be excluded, no Schroders entity accepts any liability for any error or omission in this material or for any resulting loss or damage (whether direct, indirect, consequential or otherwise). This article may contain ‘forward-looking’ information, such as forecasts or projections. Please note that any such information is not a guarantee of any future performance and there is no assurance that any forecast or projection will be realised.

This material has not been reviewed by any regulator.

The pandemic has not only had an effect on people's investment and savings behaviour but also on their retirement outlook.

The 2021 Natixis Global Retirement Index looks at the state of retirement security around the world — and takes a deep dive into four critical concerns for retirement savers, including inflation, interest rates, public debt, and a world of worries.