As economies reopen, demand for copper will naturally grow. This versatile metal is widely used in the construction and infrastructure industries, making it a good bellwether for the strength of the world economy. But copper is also central to the rollout of sustainable technology, earning its nickname of ‘the green metal’. And as governments bring forward net zero emissions targets, demand should see an extra boost. We take a look at the outlook for copper demand and supply. And consider how rising prices for copper and other commodities could feed inflation.

What is it that makes this metal so special?

Copper has four key qualities which guarantee its place at the centre of the green energy transition. It is ductile, meaning it can be rolled into sheets and pulled into wires without breaking. It is among the best metallic conductors of electricity, beaten only by silver and gold. It is also an excellent conductor of heat. Finally, it resists corrosion well, due to a natural protective coating, famously turning the colour from a rich brown to green.

Both are supported by shifts in government policy and incentives for consumers. Firstly, the manufacture of electric vehicles needs four times as much copper wiring as traditional cars, not least in the motor coil that drives a car’s engine. Added to this are the extra quantities of copper required for electric charging points and new generation car batteries. 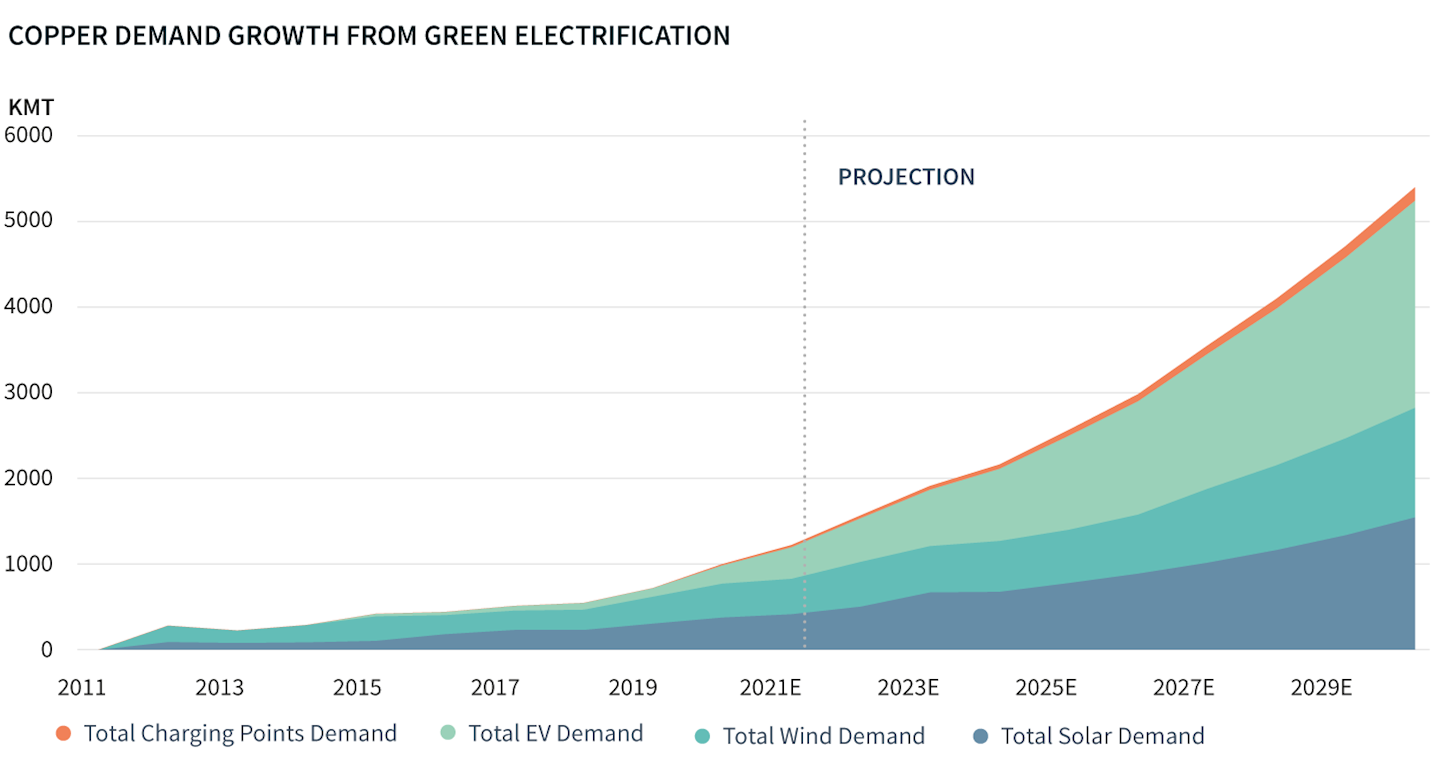 Secondly comes the plan to increase sustainable power generation. Renewable energy sites, such as wind and solar farms, typically require five times the copper used in fossil fuel plants. Wind energy alone is currently forecast at a fifth of future green demand. But that figure could increase with the trend to large-scale offshore wind farms, which require double the amount of copper. Developments in grid energy storage systems will eventually also boost demand.

Copper can be found in industrial quantities around the world

The only issue being that it must be extracted from the ground. Prices slumped as China’s massive investment phase came to an end in the early 2000s, and very little investment has been made in new mines since then. With prices once again touching historical highs, mining companies could be tempted to break ground on new projects, although they can take many years to deliver.

When supply restrictions meet a structural surge in demand, prices of base metals like copper can jump sharply. Industrial metals, such as iron ore, are also on the rise. On top of this, strong demand for deliverable goods during pandemic lockdowns has collided with supply chain bottlenecks to squeeze prices of manufactured products higher. Inflation fears have already caused jitters in the bond markets this year and further volatility spikes could be seen. It’s worth noting that what is troubling for bonds might be very positive for different types of asset classes. As ever in uncertain times, a diversified portfolio can help to weather any market ups and downs.

China continued to impose its regulatory clampdown on a widening spread of sectors, from education and tech, to prescription medicine and alcohol, with a view to enhancing ‘common prosperity’. Equities in the targeted sectors fell sharply in response.