At the UN General Assembly in September 2020 China’s President Xi Jinping pledged that the country would become net zero by 2060. This was a surprise move that has been hailed as a significant step forward in the global effort to address the Climate Crisis, given that China is responsible for around 30% of global emissions. He also pledged that China’s emissions would peak before 2030, having previously committed to peak emissions “around” 2030.

However, this announcement came in the same year that China approved plans to build new coal plants at the fastest rate since 2015, proposing to add an additional 40 gigawatts (GW). For context, the total UK electricity generation capacity from all sources is 107GW.

So, is China serious about decarbonising? And how does a country that consumes more coal than the rest of the world combined get to carbon neutrality? 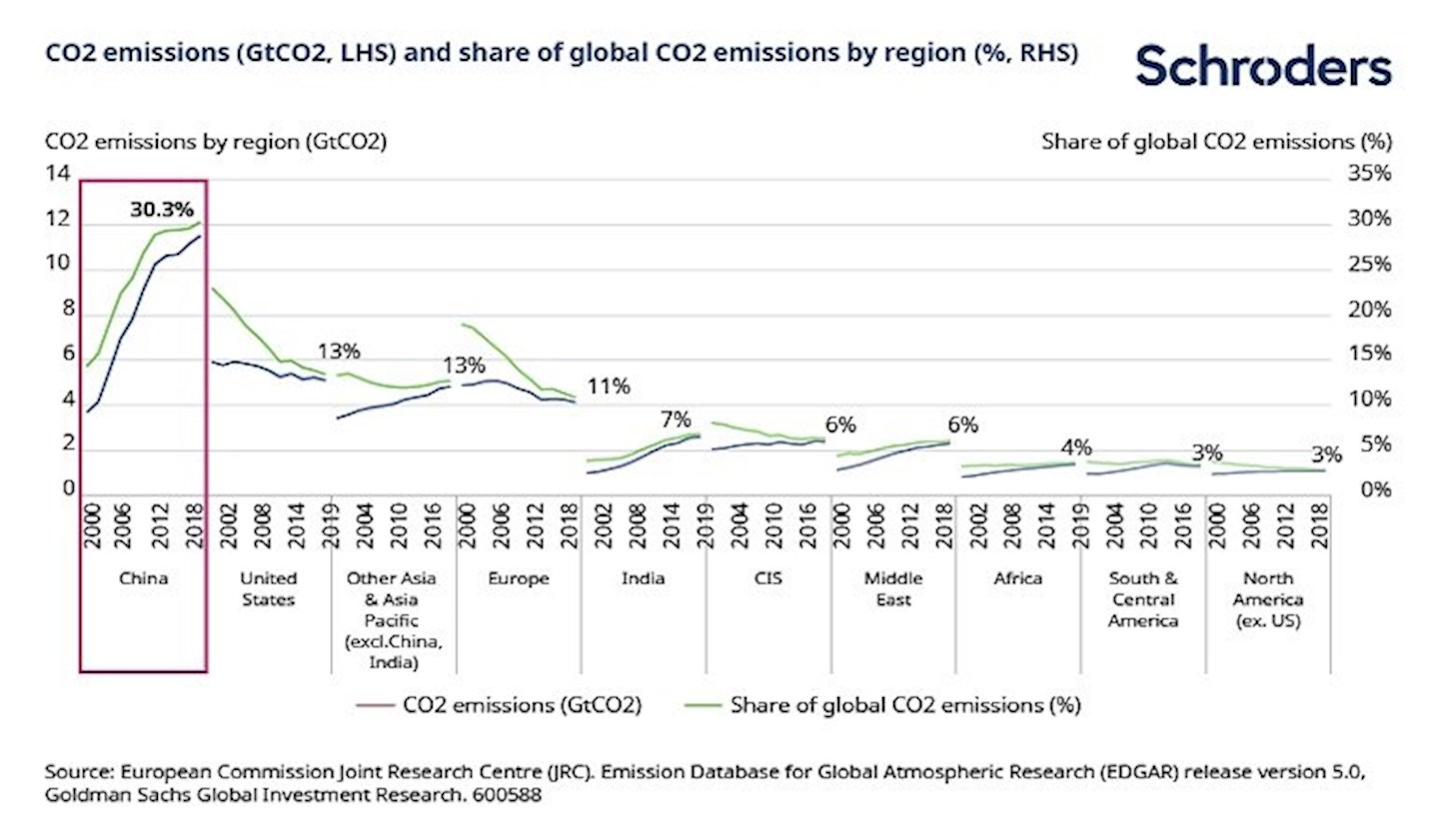 What would it take to get China to net zero and what are some of the positive steps being taken?

Energy: Decarbonising the energy mix is the simplest piece of the puzzle, but still represents a dramatic transformation and a phenomenal task. In 2019, coal accounted for around 65% of China’s electricity generation. To achieve net zero by 2060 implies that power from non-fossil fuels will likely have to top 85% by 2060. This shift will have to occur in the context of an expected tripling of total electricity demand (according to 2021 estimates by Goldman Sachs).

The levelised cost of electricity (the average cost of electricity produced by a generating plant over its lifetime) from wind and solar is already lower than new coal plants and will soon become cheaper than running existing plants. The technological solution is commercial without subsidies. Deployment needs to accelerate, and we are seeing concrete near-term targets to support this: under the 14th Five Year Plan (covering 2021-2025) China is aiming for 500GW of new wind and solar combined and for non-fossil fuels to make up 20% of primary energy use by 2025.

Mobility: China already has the largest electric vehicle market in the world, driven by various ‘carrot and stick’ policies to promote new energy vehicles (NEVs) over internal combustion engine (ICE) vehicles. As the NEV industry continues to expand, cost parity with ICE vehicles is expected to be reached over the next 2-3 years and subsidies will fall away.

Industry: Industry accounts for more than a quarter of China’s emissions. It will likely be the most challenging sector to decarbonise, but there are some tentative signs that President Xi’s announcement is catalysing action. For example, in January, China’s largest steelmaker committed to become net zero by 2050 in the first such announcement by a major Chinese steel company. Baowu Steel is responsible for 5% of global production and has pledged to reach peak emissions in 2023 and reduce carbon emissions by 30% by 2025.

With Chinese companies making up six of the top 10 global steel producers, and steel production accounting for 15% of the country’s CO2 emissions, we would expect others to follow suit to fall in line with the government pledge. While the exact pathway to decarbonisation still needs to be spelled out, not least because the average age of China’s steel plant fleet is only 10-15 years, this is a hugely important commitment.

In the first phase it only covers power generation, the carbon price is low (around $6/tonne vs more than $35/tonne in the EU), and it remains to be seen how tightly compliance will be enforced. As China’s abatement cost curve (an estimate of the cost of reducing emissions in a given year) demonstrates, meaningful progress will only be made with materially higher carbon prices and with a broader scope of emissions covered. 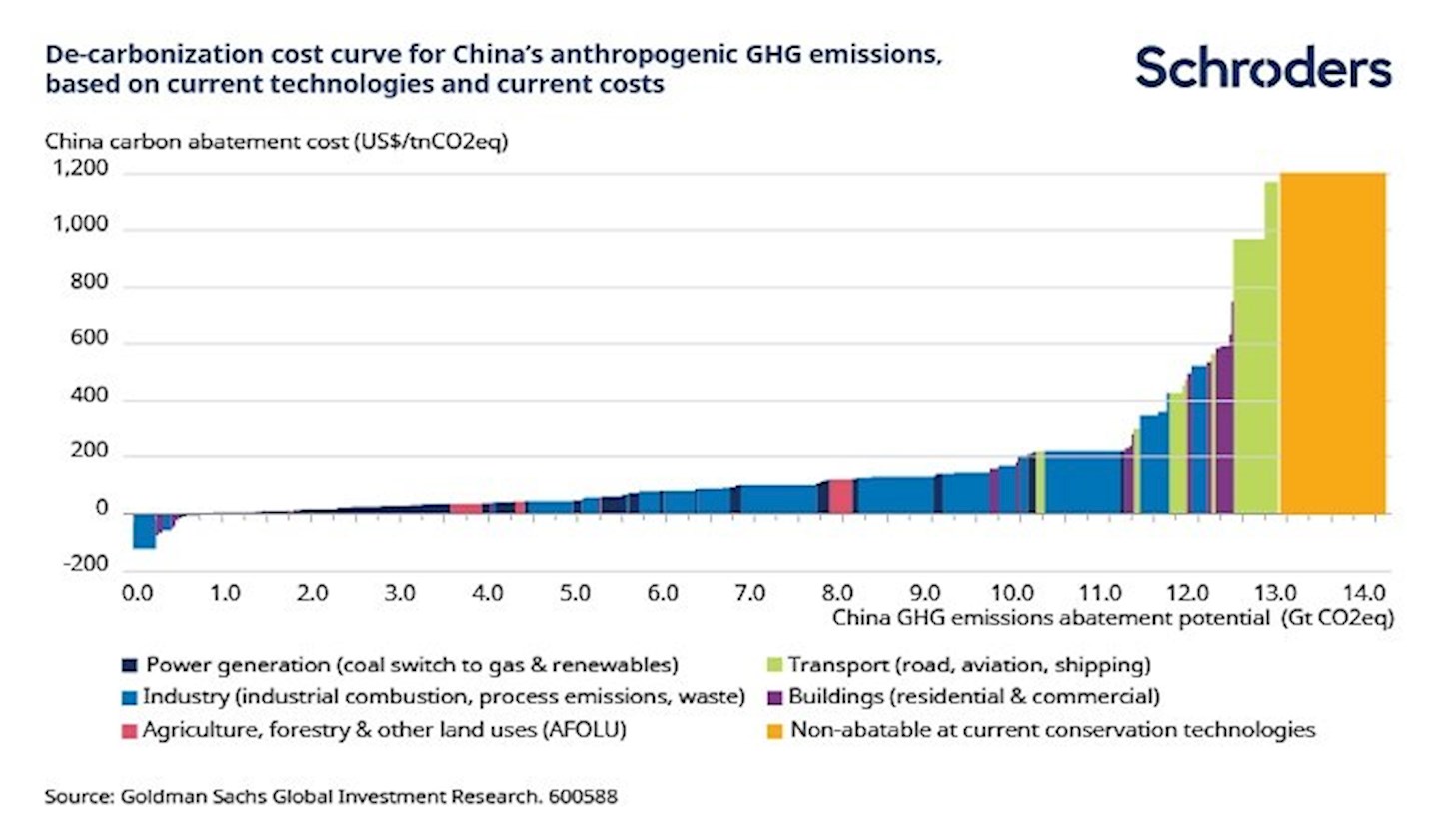 What does this mean for investors?

Whilst a lot of work remains to be done, the commitment to net zero further strengthens the secular growth story for the tools of decarbonisation such as renewables, electric vehicles, green hydrogen, energy storage and carbon capture and storage. According to one estimate, the clean tech investment opportunity could be as high as $16 trillion (2021 estimates by Goldman Sachs).

China has a history of using industrial policy to forge leadership positions in key technologies and so it seems likely that the key beneficiaries will be the domestic companies. One thing is clear: climate change investors cannot afford to ignore the Chinese market.

Marketing material for professional clients only. Investment involves risk. Any reference to sectors/countries/stocks/securities are for illustrative purposes only and not a recommendation to buy or sell any financial instrument/securities or adopt any investment strategy. The material is not intended to provide, and should not be relied on for, accounting, legal or tax advice, or investment recommendations. Reliance should not be placed on any views or information in the material when taking individual investment and/or strategic decisions. Past performance is not a guide to future performance and may not be repeated. The value of investments and the income from them may go down as well as up and investors may not get back the amounts originally invested. Exchange rate changes may cause the value of investments to fall as well as rise. Schroders has expressed its own views and opinions in this document and these may change. Information herein is believed to be reliable but Schroders does not warrant its completeness or accuracy. Insofar as liability under relevant laws cannot be excluded, no Schroders entity accepts any liability for any error or omission in this material or for any resulting loss or damage (whether direct, indirect, consequential or otherwise). This article may contain ‘forward-looking’ information, such as forecasts or projections. Please note that any such information is not a guarantee of any future performance and there is no assurance that any forecast or projection will be realised. This material has not been reviewed by any regulator.

Fraught negotiations at the COP27 in Egypt produced a landmark deal. This should see vulnerable countries compensated for the acute damage caused by climate change.

US President Joe Biden signed a $740 billion climate change, healthcare and tax bill into law. Heralding the Inflation Reduction Act (IRA) for its record investment in cutting carbon emissions. The act is the largest investment to fight climate change in US history.